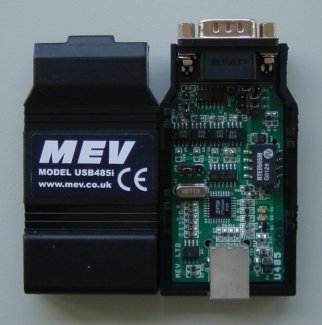 The RS485 converters have big advantages over traditional methods of accessing RS485 networks from PCs. The converters take their power from the USB port and therefore require no external power supply, a big advantage in portable and industrial applications.

The USB485i is fully opto-isolated giving valuable protection to the PC in harsh environments.

They are ideal for use with RS485 two wire networks as another big advantage of the USB485 is that it automatically enables the RS485 transmitter when data is to be transmitted. This allows it to support two wire, half duplex communications without any need to control the RS485 transmitter enable from the application program. In short an application program written to support RS232 comms with no flow control can be made to interface to RS485 without modification.

For information on the range of baud rates supported see Supported Baud Rates for USB232U and USB485Ui.

Many modern Desktop and Laptop PCs do not have serial ports as standard but all have USB ports. The USB232 /485 range provide a compact and cost effective solution to interfacing new PCs to existing RS-232 and RS-485 networks.

The devices are USB 1.1 specification full speed (12 mbits/second) compliant. This means they will work when attached to USB 1.1 or USB 2.0 ports.

Each of the USB232 /485 series of interfaces comes with Windows and Mac OS compatible drivers and are designed to meet stringent performance requirements and be easy to use while maintaining compatibility with standard serial communications boards. The devices are also supported by Linux, FreeBSD and OpenBSD. The Windows drivers are compatible with LabVIEW standard serial driver interface (NI VISA).